In order to make any trade show a success, it's vital that your company construct a comprehensive social media marketing strategy to implement before, during, and after a show.

Social media has become the primary way that people and businesses communicate with each other, because it's easy, convenient, and immediate.

Not only that, social media has also become one of the most economical and successful means of marketing that businesses can leverage, if executed properly.

As it turns out, there's a bit of method to the madness when it comes to constructing a social media marketing strategy for trade shows, but, if done effectively, the return on investment can be tenfold.

Don't fool yourself by thinking that you can call it a day after posting a tweet or two, because that's definitely not going to cut it.

If you're looking for guidance on building a beginning-to-end trade show marketing strategy, then check out "The Ultimate Checklist of Trade Show and Exhibit Marketing Tactics" post, and be absolutely sure to steer clear of these seven social media DON'TS when marketing your company online for your next trade show.

The worst thing you can possibly do is to not have a social media marketing strategy for a trade show.

That's like showing up to an interview without a résumé or portfolio and expecting the interviewers to remember anything about you, let alone consider you for the job.

Neglecting to have a social media strategy altogether will prevent your company from maximizing its exposure and success at a trade show, because it's all about keeping your audience engaged and in-the-know.

When it comes to marketing your company on social media, having the mindset of "quantity over quality" is the wrong approach.

Focus on posting content that your audience wants to engage with and see, otherwise you're wasting your time and boring them with generic content, not to mention probably diluting your brand image online, too.

Therefore, instead of posting lackluster updates that your company will be at such-and-such booth at such-and-such trade show, why not encourage your audience to guess what number your booth is with an engaging riddle or contest.

Make your posts fun and exciting, not dreadful and annoying.

There is nothing worst than a business that sends out erroneous posts to its audience, habitually.

Companies who commit such crimes run the risk of losing credibility and followers, and it's extremely difficult to gain back those followers once they're gone.

Therefore, think before you tweet, or at least invest in a decent app that checks for grammatical and spelling errors, like Ginger Page.

Imagery is one of the best ways to capture the attention of your followers online, but do it poorly, and you'll turn them off.

There's no point in posting a photo that is difficult to see or had to make out, because it's only going to frustrate or annoy your audience.

Likewise, refrain from posting photos that don't really tell a story or send a message.

For instance, no one wants to see a picture of you or your teammates sitting in the booth bored and wasting time. Instead, pass the time by posting a photo of all the SWAG items you're giving away and indicate how fast they're "flying off the shelves" at your booth.

Entice your audience and invite them to join in on the fun happening at your booth.

5. "The More Social Posts We Make, The More Followers We'll Get."

Posting too little about the trade show is a social media marketing crime, but posting too much is an even greater offense.

Don't flood your audience's news feed with a play-by-play of the show, unless you're "live tweeting" a presentation that is of great importance to your followers -- quality over quantity, here.

There's not really a specific number for how many posts per day is acceptable while you're at a trade show, because that varies by industry and audience.

You can, however, gauge what other people in the industry are doing on social media to see what's working for them, then construct a plan from there.

The important thing to remember is to play close attention to what your audience and the industry, as a whole, is responding to, and you can measure that by level of engagement, likes, shares, etc. -- again, lest you forget, quality over quantity.

6. "Responding to Tweets is Not a Good Use of Our Time."

The purpose of social media is to reach and engage your followers, so be sure to carry on the dialogue when they spark conversation.

The more you respond to your followers, the more opportunity you have to make a connection with them.

Try not to think of social media as a bulletin board you post things to and hope for the best.

Instead, consider it a giant, 24/7 networking portal teeming with individuals waiting to hear what you have to say.

7. "No One Wants to Hear About The Show. We Don't Need to Update Them About The Details."

At trade shows, sharing is caring.

If there's a presentation being given at the trade show by one of the influencers in your industry, then by all means, snap a photo of that individual on stage and accompany it with an inspirational caption and tag that company or person in the post.

We're not saying to go overboard and tag everyone in your posts, but a few name-drops here and there never hurt anyone.

Give credit where credit is due in your industry, but also tie it back to your company's advancements, mission, or initiatives.

At the end of the day, your trade show social media marketing strategy should be a nice balance between satisfying the interests of your audience, your industry, and your company.

People want to know that there is an actual human being behind these posts, so show the more human side of your business when posting to social media. Remember to use social media to talk to your followers, not at them.

8. Have You Made Any Social Media Mistakes?

We'd love to hear your story about one time you made a boo-boo on social media. Let us know in the comments below! 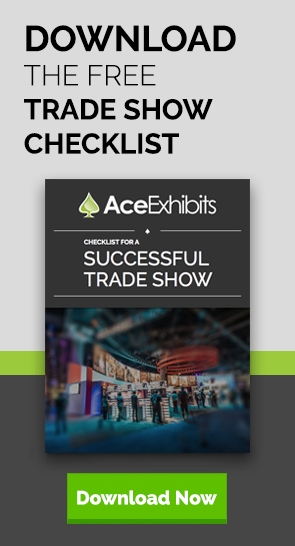